I previously went public with my goal of reading 100 books this year.  I’m not quite ready to say that it won’t happen.  However several factors have intervened.  The first is that my sister Cathy is requiring more care from Amy and me.  This, combined with teaching, has left me in a state of exhaustion for a sizable portion of the last month.  I haven’t missed any days of class.  But I have had a difficult time keeping up with grading.

The other issue that tends to cast a doubt on the viability of this goal is that I’m reading some behemoths now, the main one being A Secular Age by Charles Taylor.  Weighing in at 896 pages, Taylor chronicles how the worldview of the West has experienced revolutionary changes from the Middle Ages up until now.  He writes of how the outlook of pre-Enlightenment Europe was profoundly supernaturalistic, a world that was enchanted, in which the Divine broke through, even through inanimate objects (think of the Holy Grail, for example).  Taylor makes the case that over time, a number of developments took place across different areas, such as the Enlightenment, the rise of modern politics, “polite society,” and perhaps most of all, a change in the perception of the interaction of God in this world.  I’m about a third of the way through the book.  For me, it’s timely, it’s educational, it’s interesting, and being a work of philosophy, it’s stretching me.  At this point, I’ve having to trust the author to take me where he’s going.

James K. A. Smith introduced me to this book in his guide to Taylor’s work, How Not To Be Secular.  It’s been long enough that I don’t remember too many specifics about Dr. Smith’s book, except that it made me want to read Taylor.  So, it seems that Dr. Smith achieved his purpose with me.

Another book on the nightstand is Rod Dreher’s How Dante Can Save Your Life. Mr. Dreher is a senior editor of The American Conservative, and one of my favorite writers.  He went through a crisis in his life similar to my own in many ways, moving back to the town where he grew up after an absence of over twenty years after the death of his sister, and experiencing an adjustment difficult enough to lead to a physical, emotional, and spiritual breakdown.  The Lord used Dante’s Divine Comedy to lead him out of the dark wood that he experienced midway through his life, with striking parallels to Dante’s own experience.  It’s an enjoyable read, and it has succeeded in motivating me to begin again with the Commedia.  I’ve read Inferno several times before, but have gone no further, so I opened up Purgatorio last night.  I’ve only read through Canto III, but so far, it’s surprising how hopeful and optimistic the beginning of Purgatorio is. 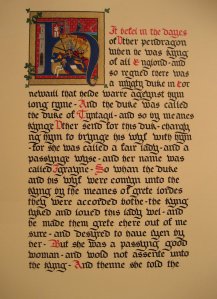 Two months to the day since I last blogged, here I am again.  After beginning the year with so many challenging goals, reality is creeping in, which brings the realization that some adjustments are in order.  I’m currently thinking through what those adjustments will look like.

So, in the last two months, I’ve taken on another composition and literature class.  We’re reading Le Morte D’ Arthur, which I hadn’t even read before, much less taught it.  In one way, it’s kind of difficult to connect with knighthood, the age of chivalry, and the quest paradigm.  However, Malory is forthright about the failures of both Arthur and the knights.  The Round Table is a community that aspires to live a virtuous life.  The inability of the knights to live up to their ideals doesn’t invalidate the ideals.  Rather, it shows that these are worthy of striving for.  I’m also teaching journalistic writing, which is something I’ve never done before.  I’m enjoying both the content and the students very much!